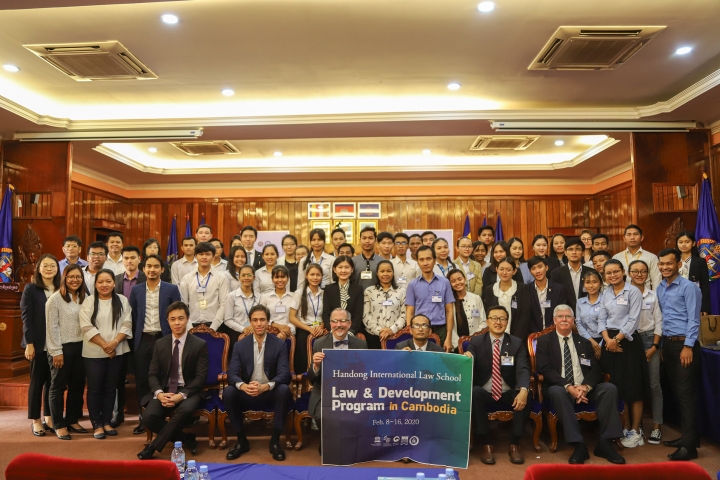 President Hor Peng of NUM, who hosted this joint conference, said in the welcoming speech, “I feel glad to be able to host joint conference with Handong Global University, with the subject of Dispute Resolution, each year.” He also said, “I hope that the students learn a lot from lectures of various jurists of Korea, United States, Singapore, Cambodia, and that these will be good opportunity to be helpful towards international conferences such as Moot Court.”

Professor Jong-Su Park of HILS said, “I hope that this conference on the topic of Dispute Resolution, one of important works towards jurists, will be helpful towards law students of Korea and Cambodia in understanding Dispute as an alternative for legal actions.”

This conference consisted of various special lectures, including “Survey of American Legal Actions regarding Dispute Resolution” by Professor Fred Ross, “A Judicial Point Regarding Arbitration: Outlook and Difficulty” by Judge David Prince, “Introduction to Investment Arbitration” by Lawyers Dimitrios Kalsikis and Anthony Nicholls of Shearman & Sterling Law Firm. Especially in the afternoon, a Mock Arbitration Hearing between HILS and NUM students were held, to learn about not just theories, but also practical affair conditions.

Yoon-Jeong Hwang of HILS said, “It was a valuable opportunity to participate in a conference on the topic of Dispute Resolution with the law degree students of Cambodia. Also, it was a time to understand about the importance of Arbitration that can resolve disputes without going to court action and learn about large frame on theory and actuality by lectures based on practical experiences of professional lawyers.

Handong Global University, on the 12th, hosted Law and Development Conference with Royal Academy for Judicial Professions (RAJP) of Cambodia and conducted various discussions with law firms of Cambodia for cooperation.