HGU Ban Ki-moon Institute for Global Education in Support of UNAI (IGE)held a special lecture by the 8th Secretary General Ban Ki-moon, the honorary president at IGE, at IGE Kim Young-Gil GRACE School on November 12. Under the title “UN and its 2030 agenda Sustainable Development Goals: Roles of Global Citizens”, former Secretary-General Ban Ki-moon delivered a detailed message on the global leader’s role for a sustainable future.

Former Secretary-General Ban Ki-moon gave a lecture on the right values and attitudes that the leader should possess to lead the age of sustainable development, saying, "The real leader of the 21st century is the one who sacrifices himself and accomplishes his goals with others." Also, he encouraged students of this era, which is the first generation of global citizens, to have a sense of passion, empathy and responsibility for a better world.

Students attending the lecture held a question-and-answer session with former Secretary-General Ban Ki-moon, asking a variety of questions, including "the most important thing for global citizenship Education, what can be done as students," and "the role of developing countries to achieve sustainable development goals.

"Through this lecture, we were able to learn about the leadership we should have in leading the 21st century. Furthermore, it was time to think intensively about what can be done as a young man of this age in terms of global citizens and roles." said Kim Sung-hyuk (School of Magagement,2018). 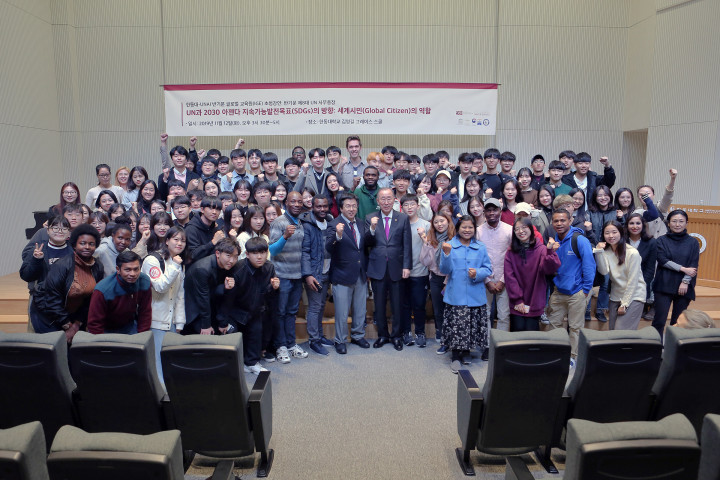