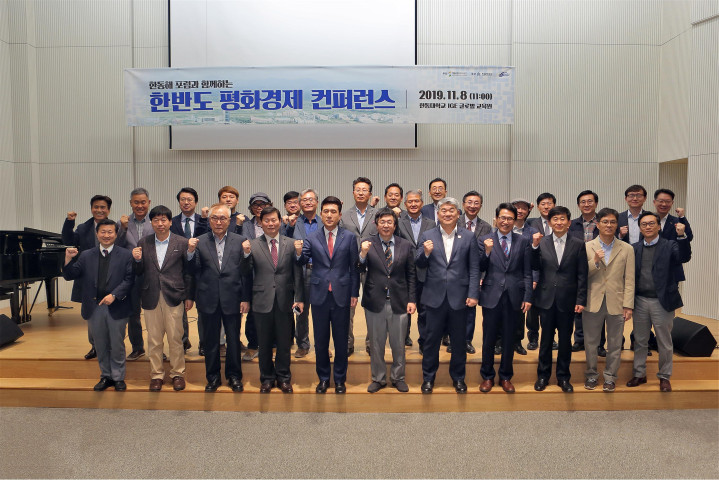 Prior to the beginning of the conference, President Soon Heung Jang, also the Chairman of Handonghae Forum, gave the welcom speech, emphasizing the importance of preparing for peaceful unification and harmonic cooperation towards peace and prosperity even in the time of uncertainty. Kang-Duk Lee, Mayor of Pohang, called for discussions on about the role of Pohang in new North economy when the time of inter-Korean economic cooperation comes in the future.

Wide and profound disscusions on the matter of peace economy of Korean Peninsula, including the activation of inter-Korean economic cooperation, followed. The lecturer of the conference, Jin-Hyang Kim, the Chairman of Gaesung Industrial Complex, explained the importance of peace economy in Korean Peninsula in various perpectives, and emphasized how the rightful understanding of North Korea will be the basis of Korea’s way to prosperity in the time of inter- Korean economic cooperation. Seo-Jin Kim, executive Vice President of Gaesung Industrial Complex Bussiness Association, also explained successful cases of Gaesung Industrial Complex, stressing how the inter-Korean economic cooperation, and peace economy would be the new power to help our economy to overcome the current steady state.

Various opinions to use the East Sea of Korea, a geographical condition of Gyeongsangbuk-do, for the building of peace economy of Korean Peninsula were proposed. Jung-Gon Ryu, member of Handonghae Forum and a senior researcher at Korean Maritime Institute discussed about cultural exchange including, the restoration of flight between Uleung-do and Wonsan, and Dok-do camp for inter-Korean teenagers, while propsing to build cornerstone for cooperation through joint research of Maritime environment, and as soon as conditions are met to stregthen ocean and fishery industry of inter-Korean economic cooperation through joint development of water resources of East Sea of Korea.

The proposals to utilize the geographical and economical advantages of Pohang also drew attentions. Sung-Mo Jung, professor at POSTECH, and Jun-Pyo Park, a researcher at Pohang Industiral Science and Technology, gave a persuasive speech that Pohang is the best place to utilize mineral resources of North Korea, including steel, for economic cooperatoin activities. Meanwhile, comments and questions for the lecturers continued to the luncheon venue.

Jin-Ho Jung, professor at Handong Global University, who took initiatives to plan and prepare for the conference, and worked as the main MC, emphasized that the conference was meaningful in the sense that Gaesung Industrial Complex, which holds 14 years of experience of inter-Korean economic cooperation, and newly starting Handonghae Forum, both unification oriented groups, are united for better future of Korean Peninsula under common interests.

In his closing remarks, President Jang expressed that if pending political issues are well solved and stable inter-Korean relations are established, the beautiful outcome of peace and prosperity will be achieved amid the long journey toward unification, and asked for continued attentions that 10 tasks of inter-Korean economic cooperation of Gyeongsangbuk-do will be presented by the end of this year.