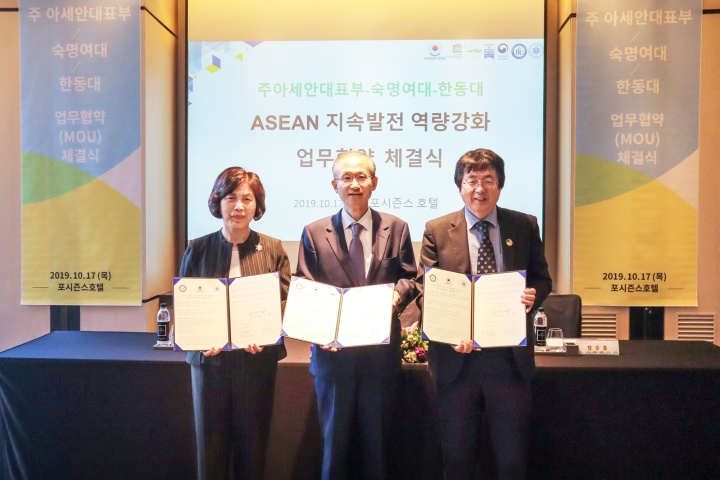 Handong Global University signed this Memorandum of Understanding to establish network between universities and institutions within ASEAN Nations, and to strengthen sustainable development capacity of ASEAN. In particular, this signing ceremony was held before South Korea-ASEAN Summit that will be held in Busan on November, as part of improvement and support of higher education in ASEAN nations.

President Soon-Heung Chang of Handong Global University said, “ For the side of ASEAN (Association of South-East Asian Nations), field that needs as much support as economic cooperation is education.” He also said, “Cooperation thus far with ASEAN nations was mostly economic cooperation with industries. Handong Global University was able to open road for educational cooperation for the first time with ASEAN nations.” Additionally, he said, “Through cooperation in educational field, we will add support to New Southern Policy pushed by the government. We will unsparingly add support to the sustainable development of ASEAN nations.”

Ambassador Extraordinary and Plenipotentiary of the Republic of Korea to ASEAN Sungnam Lim said, “Through the signing of this Memorandum of Understanding, Mission of Republic of Korea to ASEAN will cooperate with Handong Global University and Sookmyung Women‘s University to discover and operate the cooperation development program of Higher Education in ASEAN level.” Additionally, President JungAi Kang of Sookmyung Women’s said “Sookmyung Women‘s University will do its best to grow ASEAN-style Female Leaders that are equipped with problem-solving skills of Fourth Industrial Revolution era in focus to social problems, and also raise a talent capable of being trusted around the world in cooperation with the two institutions.”

Meanwhile, Handong Global University and Sookmyung Women‘s University, along with the signing ceremony today, presented performances and best examples of missions conducted in ASEAN nations for years as Leading Universities of UNESCO UNITWIN program, as well as share cooperation plans and plans to operate mission in the future with ASEAN nations. In particular, Handong Global University proposed that they will continue to strengthen support for development of Entrepreneurship Educational Program, Higher Education Capabilities, and develop future talents in Malaysia, Indonesia, Philippines etc., in addition to previously cooperated ASEAN nations, including Cambodia, Myanmar, Vietnam, Thailand, Laos, etc. starting from 2020.

* UNITWIN, University Twinning and Networking is a program created by UNESCO in 1992 for the purpose of educating developing nation’s universities, supporting their research institutes, reducing gaps in knowledge, and growing their ability for self-reliance through a network of universities from developed and developing nations. Handong Global University in 2007 became the first to be designated as a host university of UNITWIN.